On January 14, 2019, the FCC’s Declaratory Ruling and Third Report and Order went into effect and significantly reduced the rights of state and local public entities regarding their control of the placement of small cell or small wireless facilities. It limited their ability to charge wireless service providers for access to municipally owned poles in the public rights of way. It also restricted what municipalities can and cannot require access to the public right of way (PROW).

AT&T and Verizon. You have to hand it to these two companies – the sheer amount of money they have paid out for lobbying and studies at the state level and the national level is dizzying. It was effective and well-orchestrated. At the end of the day, the municipalities didn’t have a chance – they were unprepared, uncoordinated in their response, and didn’t realize the consequences of their inaction until too late in the process. AT&T’s lobbying efforts dwarfed those of the municipalities at every level. Furthermore, AT&T and Verizon successfully scared (bribed?) the FCC and state legislators into believing that a vote against this 5G Order or statewide legislation is paramount to a vote against national security and against rural broadband. Even for legislators who knew that they would never see any small cells in their represented areas and would have voted against the legislation couldn’t else they be seen as voting against broadband to underserved areas.

As a result, AT&T and Verizon now have virtually limitless access to public ROWs at rates 1/6th to 1/8th of what they were agreeing to an arm’s length negotiations in those same states prior to state legislation. While other wireless carriers will share in these benefits, make no mistake, the Order will construe greater benefits to AT&T and Verizon by nature of their significant existing fiber holdings and larger CapEx budgets toward small cells. While Sprint/T-Mobile and other smaller carriers will also see some benefit, their lack of significant owned fiber holdings and limited CapEx will push them toward leasing other companies’ fiber/pole infrastructure. Furthermore, both companies are distracted otherwise with the possible merger. In addition, because the state legislation prohibits the charging of franchise fees, AT&T and Verizon will now be able to offer wireline-like services without having to pay the same fees as their wireline competitors. 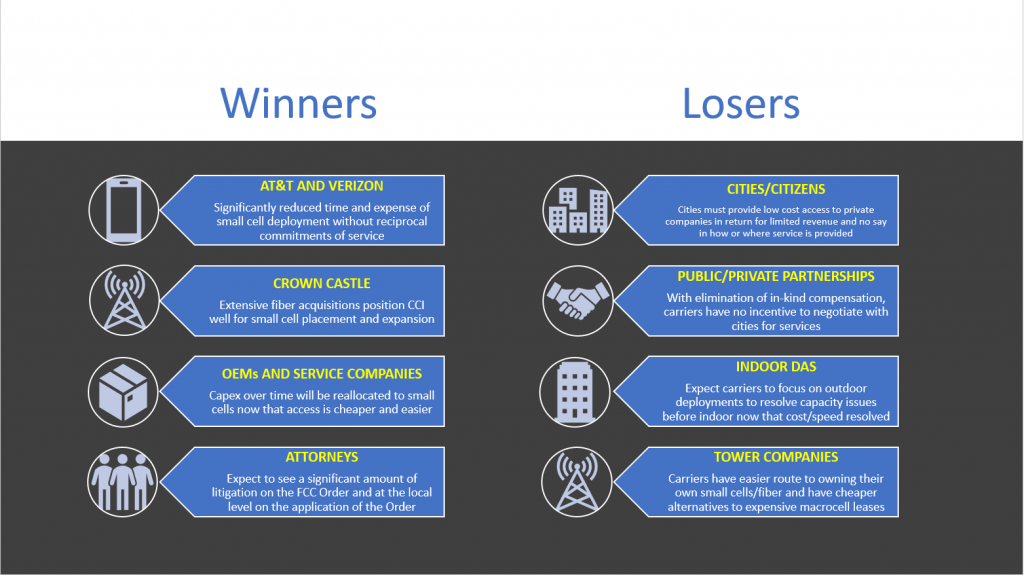 Crown Castle. Crown Castle’s strategy of acquiring large fiber providers in the top 25 markets looks even better now. With reduced restrictions on the placement of small cells and new poles in ROWs, Crown Castle’s available fiber assets will be easier to access by wireless service providers. We specifically note that Crown Castle has fiber in areas in which it has historically been more difficult or costly to gain access to the ROW, like New York City and San Francisco. These also happen to be areas with pent-up demand due to spectrum deficiencies by some wireless carriers. However, the same benefits that Crown Castle will receive in terms of direct access to fiber will be shared by other competitors and by the wireless carriers with their own fiber holdings. Historically, Crown Castle has created a value-add proposition for itself by procuring agreements with cities for access to PROW that reduces the time to deployment. That value-add proposition is eroded somewhat by this Order, as the carrier’s themselves can deploy small cells and fiber much easier in what were previously difficult areas to deploy without a significant time delay. Furthermore, if a wireless carrier doesn’t like the terms being offered by Crown Castle either before they deploy or after they deploy small cells on Crown Castle fiber, there isn’t the same barrier to entry that there has been historical with macrocell towers.  The fiber/small cell model just isn’t as sticky as macrocell towers, and we have already talked to private companies that are preparing to enter the space now that the regulatory burden is clearly defined and limited.

OEMs and Service Companies. While the jury is still out on whether the Order spurs significantly greater cumulative wireless CapEx, we do expect that it will cause reallocation of CapEx from macrocells to small cells across all the Big Four carriers. Some of the top cities in terms of spectrum limitations for the wireless carriers are also in states that have not previously approved small cell legislation. Now that the Order is final expect to see some adjustment of overall Capex to those OEMs who are farthest along and have the size to meet the carrier needs in the outdoor small cell realm (Samsung, Nokia, Ericsson) and those who provide the nuts and bolts that enable fiber connectivity like CommScope. However, both Verizon and Crown Castle suggested in earnings calls towards the end of last year that they did not expect to see meaningful increases in small cell activity- instead suggesting that they were already running at capacity.​

Attorneys. With the first round of lawsuits challenging the order filed and more on the way, attorneys on both sides will be well fed for the coming years. Furthermore, we anticipate that some cities will be sued as the wireless carriers look to gain access to difficult areas and push the interpretation of the Order.

Cities. There is no way of sugar-coating it. Cities lost big. Not only did they lose the additional income from small cells on city-owned infrastructure, but they also lost the ability to dictate requirements for how and where small cells are deployed. They have no means of ensuring that all citizens benefit from 5G. They have limited control over the placement of new poles and can’t require the shared use of the infrastructure. They get all of the burden of small cells without any reciprocal benefit other than vague promises that 5G will generate what industry speculatively claims will be hundreds of billions of dollars of economic benefits. The severity of the problem for cities is further increased by the sheer volume of small cell applications. Only large cities currently have the manpower and the expertise to review small cell applications in bulk.  Smaller cities and towns do not have it and will need to add staff or retain outside help. As Arthur Scott of the National Association of Counties put it, “(the Order) forces local governments to make a decision between rubber-stamping applications or facing crippling litigation with these providers in court.” Applicants could submit hundreds or even thousands of applications simultaneously, all subject to the shot clock.

Public/Private Partnerships. If you look at some of the agreements that were negotiated between wireless carriers and municipalities before the Order that include some type of partnership, the only way these came about was due to the cities being able to bargain with wireless carriers by extending pole top rights in exchange for services, including IoT and Smart City services. For example, see the agreements worked out between the City of San Jose and Verizon and AT&T. The new Order prohibits cities from negotiating for these types of arrangements. There is a good reason for this – each of the wireless providers envisions being able to force the sale of these types of services to the cities instead of having to provide them in exchange for pole access. In this environment, Smart City means that the carriers were smarter than the cities.

Citizens. The FCC seems to believe that any investment in 5G warrants near total disregard for local authority. By placing the burden of small cell deployment on cities while simultaneously removing the right for cities to charge or negotiate anything remotely approximating fair market value for use of their ROWs or poles, taxpayers will have to pay the delta between the actual cost of providing access to the ROWs and municipally owned poles and that which the FCC deems fair. Furthermore, they will get taxed further when an AT&T or a Verizon effectively charge the cities for access to these same 5G networks for IoT or other public safety-related purposes. Furthermore, citizens in less profitable areas will not receive 5G services on a timely basis or, in some cases, at all. One study conducted by an investor analyst found that 90% of the small cells being deployed to date are in dense urban areas, with most being in areas with a significantly higher-than-average income. Despite FCC supposition that this Order will spur development of small cells in rural and underserved areas, cities have lost any leverage they have in encouraging or regulating where and how small cells are deployed. While the industry has generated unsupported suppositions that this Order will generate $2 billion that will now go towards small cells, there isn’t any evidence that this will flow to rural areas or underserved areas. Just as corporate tax breaks spurred record stock buybacks instead of in infrastructure investment, raises for employees, or R&D, carriers will either pad their earnings with lower small cell costs or invest faster in the areas where the return on investment is quickest. (As an FYI, $2B is slightly more than what Sprint will spend in wireless CapEx in the past quarter alone. It is a drop in the bucket.)

I think that Blair Levin, (previously with the FCC) said it best:

“Third, the FCC’s draft order is based on a fallacy that no credible investor would adopt and no credible economist endorse: that reducing or eliminating costs for small cell mounting on public property in lucrative areas of the country (thus reducing carriers’ operating costs), will lead to increased capital expenditures in less lucrative areas– thus supposedly making investment more attractive in rural areas.”

Furthermore, those citizens who are lucky/unlucky enough to have a new small cell pole placed in their front or back yard will have to deal with the construction, the ongoing maintenance, and the appearance of a new pole without receiving a substantial benefit from it unless they are subscribed to that carrier.

Indoor DAS. We will readily admit we are going out on a limb on this one, but we expect to see even more pull back from new deployments of traditional indoor DAS as carriers find that access and costs related to capacity deployments are easier and cheaper respectively outdoors. There has already been a shift from carrier funded/leased indoor DAS to building owner funded indoor DAS because the carriers just aren’t willing to spend money to reach anything other than the largest venues or those with enterprise customers.

Tower Companies. While Crown Castle will stand to gain from the deployment of small cells due to their fiber holdings and small cell initiatives, all public tower companies will end up losing some current and some future macrocells that would have otherwise gone on public company-owned towers. We continue to hear of wireless carriers actively comparing the total cost of ownership (TCO) for coverage and capacity solutions, including small cells, DAS, in-building, and traditional macrocells, and selecting the best solution that meets their objectives in the cheapest overall way. Wireless carriers are no longer beholden to tower companies for capacity solutions. Assuming that the FCC Order stays in place, they can just as easily add multiple small cells and avoid costly macrocells or move off existing primarily capacity-oriented macro towers in urban and suburban areas. Make no mistake, there are many locations where macrocells are and will continue to be the best or cheapest option. However, the barrier to entry of competing solutions is definitely lower now than it was prior to the FCC Order. There has been a clear trend of wireless carriers doing whatever they can to avoid new macrocell co-locations on public tower company towers – look for that trend to continue.