In a presentation at the Cohen and Company’s 44th Annual Technology, Media, and Telecom conference, AT&T’s CTO and President of AT&T Labs Krish Prabhu indicated that AT&T believes that small cells will make up the substantial majority of their future cell tower and cell site development over the next 5 years.   In response to a question on how small cells will fit into their future 5G, fixed wireless, and IOT networks, Prabhu indicates that AT&T has approximately 90% of their macrocell network that they expect to be in place in the next five years already standing.   However, they have only deployed 5-10% of the total count of small cells that they expect to have at 2022.

Based upon our best information, AT&T currently has approximately 67,000 macrocell sites in the United States.   Assuming 10% growth, that means that AT&T will deploy approximately 6,700 new macrocells over the next 5 years.   We are unsure of the total count of small cells owned by AT&T in the US, but would estimate that number at 5,000 or less.  (If anyone has better numbers, please comment below).   If 5,000 represents 10% of their projected small cell builds, we would expect to see 50,000 new small cells over the next 5 year period.   Below is a chart showing a straight line estimate of new AT&T macrocells and small cells based upon 6,700 new macrocells and 50,000 new small cells over 5 years. 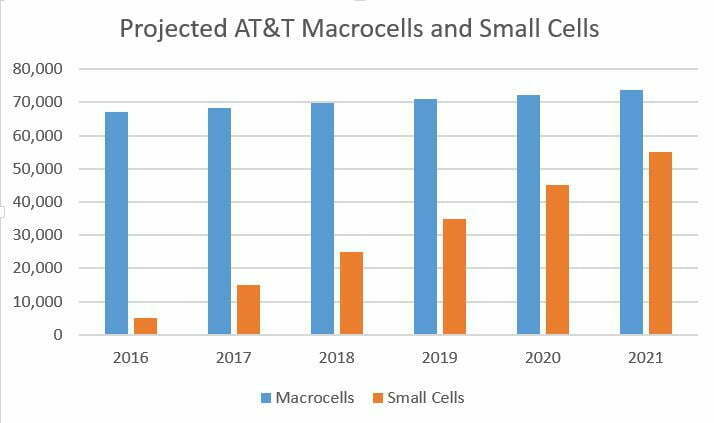 A word of caution:  AT&T previously indicated that they would be building 40,000 AT&T small cells which never actually occurred.   In this case, though, we believe that AT&T is likely to build a significant number of small cells and should exceed the 40,000 previously anticipated.  As Prabhu indicates in the discussion, 5G wireless in the millimeter wave bands “gets really bad once you go several 100 meters”.   There are only so many towers and the cost of adding new macrocells is significantly more expensive than adding new small cells.

By way of comparison, AT&T has completed just over 10,000 new macrocells over the last 5 years based upon information provided by RBC Capital Markets.

5G and LTE-U Test Markets for Each Wireless Carrier

Was 2015 the Peak of the Tower Industry?