If you have followed our musings over the years, you know that we don’t like the lease renegotiation industry.  In the past we have observed some companies (not Lendlease, Tower Alliance, or Softbank/Sprint) use high-pressure tactics, sometimes outright misrepresentations, and downright aggressive salespeople to convince landowners to agree to terms that are not advantageous to the landowner.   These tactics can tarnish the landowner/carrier relationship in our opinion. Some renegotiation is necessary, especially on overly high leases; however, the lease renegotiation industry often targets all leases, not just those that should be reduced – all in the vein of needing to reduce costs and to generate a fee for the lease optimization company. Again, we don’t object to the renegotiation efforts themselves, but we do strongly believe that the tactics used can be shady and manipulative. Recently, we have become aware of some letters and requests that Lendlease (or their agents, Tower Alliance) are using with building owners with Sprint leases that we believe are not advantageous for the landowner/building owner.

First a little background. In late 2017, Lendlease (a global infrastructure company that has formed a tower company) and Softbank (majority owner of Sprint) formed a joint venture to acquire 8,000 cell sites from Sprint across the US. We believe that these acquired sites are mostly rooftops. We suspected at the time that this was a financing transaction that Sprint entered into because it knew that if a Sprint/T-Mobile merger came to pass, Sprint might end up terminating a good number of those leases. We suspect that Lendlease/Softbank paid a reduced value for the leases as compared to what the market was paying, probably because both parties knew of the potential risk from a T-Mobile/Sprint transaction. You might ask why Lendlease/Softbank would buy these leases if there was potential risk? There are three reasons:

1. They know how long Sprint is likely to continue using those leases or have negotiated a guaranteed term.

2. They intend to try to “remarket” the Sprint lease space to other carriers if and when Sprint terminates.

3. Lendlease sees the potential to renegotiate with building owners to expand the Sprint lease area and, even if Sprint doesn’t terminate, still lease space to other carriers.

Fast forward to today and building owners whose Sprint leases were acquired by the Softbank/Lendlease joint venture are being contacted by third parties like Tower Alliance to “renegotiate” their leases. Tower Alliance (hired by Lendlease to renegotiate on the JV’s behalf) shares industry articles like “A merged Sprint/T-Mobile will shutter 25,000 towers, and Crown Castle with suffer most” and “Sprint and T-Mobile to Merge, in Bid to Remake Wireless Market”.  The email our client received contains these articles and includes the following justification:

It was a pleasure speaking with you this morning. The intent of my telephone call and this follow up email is to inform you of the project currently underway in the US by the Sprint/Lendlease Joint Venture as described in the press release and Letters of Authorizations. Sprint is assessing all of its rooftop network real estate in order to assure maximum cost efficiency. It has relocated many sites that are not efficient. The site as referenced above currently remains one of a group of sites identified as a cost efficiency target in the Sprint/Lendlease Joint Venture. In addition, I have attached some press releases speculating on the outcome of the announcement regarding the possible merger of Sprint/T-Mobile for informational purposes only. My goal is to have an amended and restated lease executed once we have negotiated the most favorable terms for the mutual benefit of both Landlord and Tenant.

Before we go on to the “ask” from Lendlease and why we recommend that building owners don’t consider it seriously, we have to question the statement, “It (Sprint) has relocated many sites that are not efficient.” Unless they are referring to lease decommissions from the Clearwire/Nextel portfolios, we are unaware of any sites that have been relocated by Sprint due to cost efficiency. Perhaps there are some, but we haven’t seen them.  At any rate, we highly doubt many is more than 50.

Tower Alliance on behalf of Lendlease then asks for a number of concessions from the building owner on the new lease, which we have listed below along with our thoughts on why such changes are ultimately really bad for the building owner. 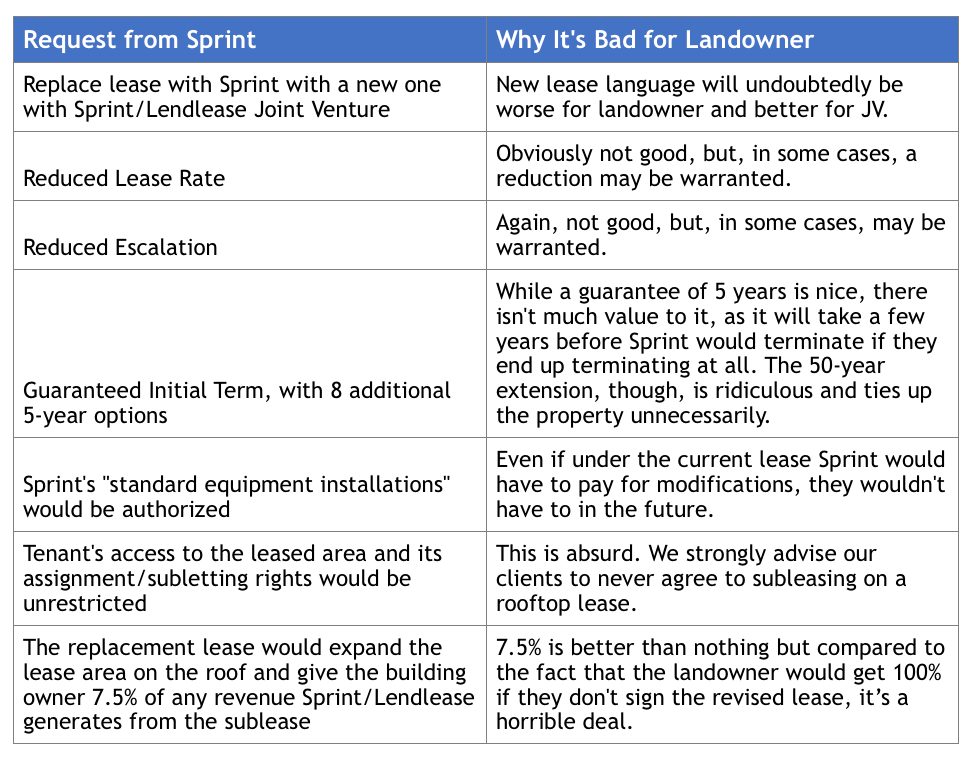 What happens if the landowner doesn’t agree to these really bad terms? Tower Alliance suggests that “if we aren’t able to come to a new agreement, the tenant will be forced to evaluate alternative site locations.” Note that they don’t say they will terminate the agreement – there has been litigation previously between landowners and another carrier that clearly prevent carriers from saying they will terminate if they don’t get their desired terms. However, the language is carefully worded to imply that termination is a risk. In reality, by not signing, in most cases, the landowner will be in exactly the same position both now and in the future. Sprint is either going to terminate or not. Another replacement carrier will either be interested in your rooftop or not. This deal doesn’t change either of those eventualities for most landowners. There will be a small subset of high-dollar Sprint rooftop leases where Lendlease may end up terminating and moving to a new rooftop. But for most landowners, this proposal from Lendlease is not a good deal and is one we would advise against. If Sprint and T-Mobile don’t merge, there is even less of a reason to agree to these terms. Fundamentally, we don’t like this type of renegotiation effort and will strongly counsel our clients against agreeing to these terms.

Got a Sprint lease and feel anguish over what to do? Contact us and we will be happy to discuss your situation and identify whether we can provide any value to you in your decision-making process.

20 Things Leaseholders Must Know About the T-Mobile/Sprint Merger!