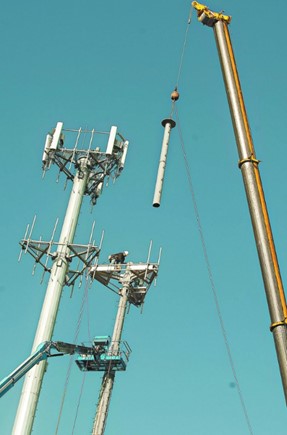 In 2017, we wrote an article about how wireless carriers pull all the stops to renegotiate
their ground and collocation leases. We decided to update it for 2022.

At the time, we noticed concentrated efforts by individual wireless carriers to issue RFPs and enter agreements with smaller tower companies to build towers adjacent to existing public and private tower company-owned towers (building a tower for a wireless carrier is known as “build-to-suit”). In short, the wireless carrier commits to moving from an existing tower to a new tower built by a private tower company on financial terms and conditions much more attractive to the wireless carrier. They “rip” their equipment off the old tower and “replace” it on the new tower, otherwise known as “rip-n-replace.” We think further clarity on how the Rip-n-Replace efforts fit into broader efforts to renegotiate will be helpful.

As far back as 2002, AT&T was trying to renegotiate the terms of its collocation, rooftop, and ground leases. They started doing this internally, then a group of people at AT&T split off to form Wireless Capital Partners (WCP). WCP eventually changed course from renegotiating leases and renewing leases to purchasing them.

There was a flurry of renegotiation activity between 2007 and 2012. AT&T and other carriers brought in new lease optimization vendors like Md7 and BlackDot Wireless. These companies used aggressive, car salesman-like tactics to get landowners and tower owners to make foolish concessions on leases. These agents pestered landowners until they acquiesced on rent, escalator, or other concessions. The programs have persisted since then because, ultimately, they have been successful.

However, a side effect to these aggressive efforts of renegotiation was that landowners grew increasingly frustrated.  As a result, they were withholding consent for equipment changes or refusing to sign permit authorizations. Alternatively, they were seeking professional help from consultants like Steel in the Air and realized they had more leverage in negotiations than the optimizers led them to believe.

Today’s efforts seem more concentrated and refined but still fundamentally revolve around wearing the landowner down. We suspect that the wireless industry has learned a lot about what works, what does not work, and what they legally can and cannot say in contract renegotiations.  For example, telling the landowner “we will terminate if you don’t agree to a rent concession,” may be considered an anticipatory breach of the lease.  As a result, lease renegotiation agents are careful not to come out and directly say that they will terminate the lease. Instead, they say that the carrier will consider all options, including possible termination under the lease. They use catchy acronyms like “TOSS” (Termination Of Subject Site) or suggest that rejecting the proposed terms will necessitate an “Alternative Site Review.”

Below please see a sample renegotiation letter from AT&T. Note the careful use of AT&T and Md7 addresses in the document. By making the letter appear like it is from AT&T instead of from a lease renegotiation company like Md7, they hope the landowner will take it more seriously.  Otherwise, some landowners will just ignore the frequent letters. 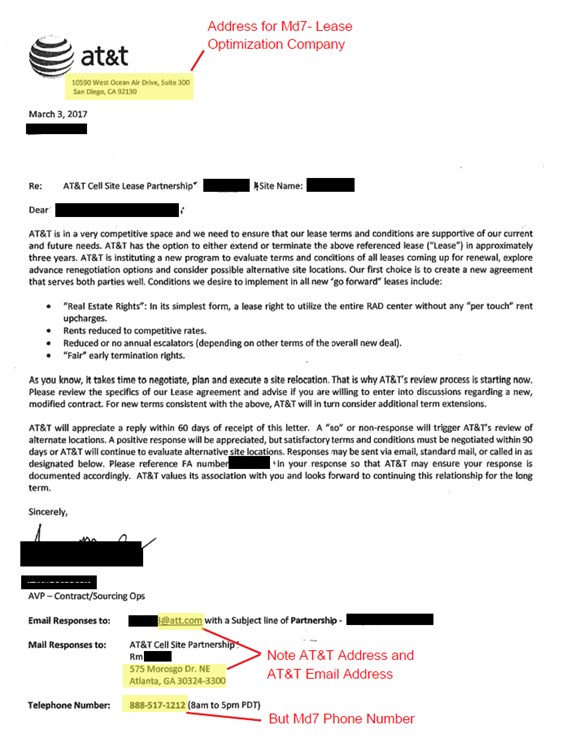 WHY DO THE LEASE OPTIMIZATION COMPANIES DO IT?

It’s about money. First, the lease optimization company gets a percentage of the overall savings in rent that will be paid over the next 5-10 years. That’s why lease optimization companies prefer to target high-dollar and high-escalation leases. Even small rent reductions can yield significantly high commissions. We anticipate that most “lease renegotiations” yield the optimization company between $5,000 to $15,000 in fees. For them, it’s about moving from one lease to the next as fast as possible. For you, it’s about tens and possibly hundreds of thousands of dollars over the term of the lease.

It’s also about other improvements to the lease language that save money or make the lease more one-sided. Below is the laundry list of what lease optimization agents seek:

They also get bonuses for each clause or change beyond the rent or escalation reduction.  In other words: the more they convince you to accept clauses that are bad for you, the more money they make. What many landowners don’t understand, though, is that there is significant value to the landowner in keeping these rights. For example, when the landowner agrees to extend the lease term far before the final lease expiration, the carrier no longer has to negotiate as aggressively near the time of expiration. By adding changes to the permitted use language, the carrier significantly limits the ability of the landowner/lessor to negotiate rent increases when the carrier needs to expand their equipment.

AMERICAN TOWER AND CROWN CASTLE: Both of these tower companies use third parties like Blvck Dot, Lyle Company, Md7, Smartlink, Tower Alliance, and other vendors to renegotiate leases. We suspect that the vendors have been told to push aggressive lease rate reductions alongside attractive lease buyout offers.  We suspect that they do this to show the landowner the “carrot” (lease buyout) vs. the “stick” (significant reduction in rent). Historically, neither tower company has moved that many towers when landowners choose not to renegotiate. Crown Castle is the more aggressive of the two companies when it comes to moving their towers rather than paying higher rent. Even then, fewer than a few hundred towers are moved each year. American Tower has moved even fewer, although there are rumors that they have a new program coming out to relocate high-dollar sites.

AT&T: AT&T has been the most aggressive over time in attempting to renegotiate its leases. AT&T uses multiple outside vendors to renegotiate their agreements. These vendors are even going as far as having term sheets for new tower leases signed with landowners on adjacent properties next to our client’s tower or rooftop sites as a means of encouraging our client to renegotiate. These efforts extend from small landowners with single sites to tower companies with hundreds of sites. AT&T seems significantly more focused on procuring unlimited expansion rights and revisions to the permitted use language than other carriers in their renegotiation efforts.

AT&T has also proven much more likely to relocate from existing towers/sites than other carriers over the last 4 years. They have entered into Build-to-Suit or Build-to-Relo agreements with multiple tower companies to build a tower near an existing high-rent AT&T collocation site. After the new tower is constructed, AT&T moves its equipment and terminates its lease. To date, there have been over 1,250 AT&T cell sites relocated.

T-MOBILE:  With their merger consummation last year with Sprint, T-Mobile’s renegotiation efforts have subsided somewhat. We don’t see nearly as many inquiries to T-Mobile or Sprint landowners as we did back in 2017. Since most Sprint leases will be terminated (or assigned to DISH), there isn’t much reason for T-Mobile to try to renegotiate them. We see some efforts to renegotiate Sprint leases, but they seem to be ones that T-Mobile intends to keep. If your lease is with T-Mobile and isn’t overly expensive, you can safely reject their renegotiation request. If your lease is with Sprint and they want to renegotiate, it’s best to reach out to us and discuss the situation. There can be situations where renegotiation is necessary to keep the lease. However, if T-Mobile has already replaced the Sprint equipment with T-Mobile equipment, your lease is safe.

VERIZON: Since 2017, Verizon has been using outside vendors to renegotiate its leases, with Md7 doing a lot of the work. Besides typical reductions in rent and escalation, they are focused on removing equipment restrictions so that Verizon can expand in the future without paying additional rent. Verizon has also initiated its own efforts to have smaller tower companies build towers near existing towers to which it can relocate.

What is our take from all this? We believe that wireless carriers (especially AT&T and Verizon) are increasingly concerned with limitations in their leases that prevent them from expanding or increasing equipment. Both companies have purchased C-Band spectrum in recent FCC auctions, and both companies are aggressively trying to deploy new equipment to existing cell sites. By adding language that allows equipment expansion, AT&T and Verizon can avoid paying additional rent.

We further believe that tower companies use third-party agents to negotiate lease extensions and buyouts in greater frequency (no pun intended) than ever before. Tower companies enjoy not having to do this work themselves, and they avoid having to train and retain full-time employees. Further, when one company cannot get a landowner to renegotiate, they can turn the project over to a new company to try again. Unfortunately, this means that landowners will continue to face repeated attempts by a rotation of third-party lease optimization firms to renegotiate their leases.

SHOULD I RENEGOTIATE MY CELL TOWER LEASE?

If your lease pays more than $1,500/mo or is set to expire in the next ten years, we recommend contacting us. In these cases, the key is knowing the risk to your specific location and whether there are other options. Just because they haven’t moved in the past doesn’t mean they can’t or won’t move now. Since we last wrote on this subject in 2017, there has been an increase in cases where a carrier moved to avoid a costly site.

If you have concerns about a letter or proposal you have received, please don’t hesitate to contact us. We will gladly review your situation for free to see if there is anything to be concerned with, and if so, we’ll make a fair and reasonable proposal to you for services. Your inquiry to us will be kept confidential, and there is no obligation to pay us anything until you sign a contract for services.

Are states going to opt-out of AT&T’s FirstNet?

AT&T Wins FirstNet but TowerCos are the Real Winners