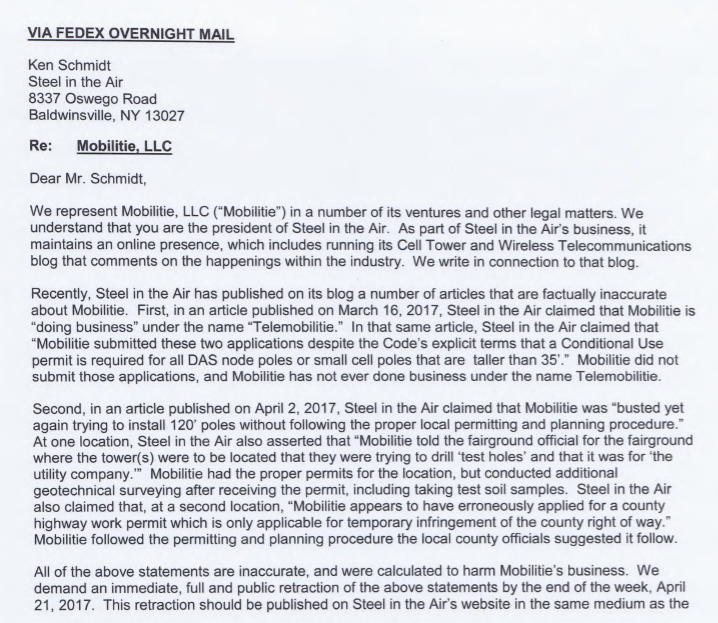 We received a demand letter from Mobilitie requesting that we retract certain statements made in previous articles regarding Mobilitie that we had written.

First, Mobilitie claims that Telemobilitie is not one of the 20 or so fictitious names that they use elsewhere. The letter also claims that Mobilitie did not submit the applications to the City of Orlando that we wrote about here- https://www.linkedin.com/pulse/crown-castle-vs-mobilitie-story-two-small-cell-ken-schmidt. If you examine the two links below, the City of Orlando interchangeably refers to Mobilitie as TeleMobilitie and Mobilitie. We did confirm that Mobilitie did not register the fictitious name “Telemobilitie” in the State of Florida. It is possible that the City was incorrect in their reference in these applications to TeleMobilitie.

Here are the minutes of the meeting where these were reviewed.

Furthermore, the person who is listed as the applicant for these applications has a profile that shows that she works for Mobilitie. Accordingly,

In this case, Mobilitie claims that they did submit all proper permits related to the request to build three 120′ poles in Washington County, NY. See the article we previously wrote. In it, we claimed that Mobilitie failed to submit the proper permits related to the installation of three 120′ poles. We based our belief of this from this article where the reporter indicated “On Vaughn Road in Kingsbury, the company applied for a county highway work permit, which is normally used when a homeowner wants to put something temporarily in the county’s right-of-way. Usually, it’s traffic cones for a driveway resurfacing, officials said.” Furthermore later in the article, the County Attorney advised the County to deny the permit requests. At this time, we do not have any separate information regarding whether Mobilitie’s permit requests were ultimately approved or whether they ended up submitting different permits that the county approved later. Accordingly, until we can confirm otherwise by a call to the County,

Steel in the Air also retracts and expressly disavows its earlier statements made on April 2, 2017 that Mobilitie was “busted yet again trying to install 120′ poles without following the proper local permitting and planning procedure.” In both instances discussed in the April 2, 2017 article, Mobilitie followed the proper local permitting and planning procedure. Steel in the Air apologizes for these misstatements and for any misleading impressions created as a result thereof.