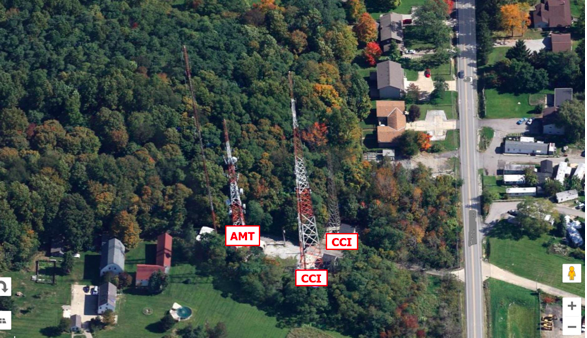 A tower is considered competing when it fulfils the same coverage or capacity goals or both as another nearby tower. Because coverage and capacity goals can vary widely depending upon the terrain, population density and distribution, time of day, difficulty of zoning, and proximity of other existing sites, there is no uniform distance where a tower would be considered as competing with another tower. We regularly assist our tower company clients with evaluating prospective acquisitions to determine how many competing towers are present across the portfolio of target towers. A tower is considered competing if it falls within the same search area or search ring as another tower. It’s not hard to see that the AMT and CCI towers in the photo above are competitive.

However, when looking at large numbers of towers, it isn’t feasible to look at each set of towers and we must make assumptions. As a rule of thumb, we tend to use the following distances for urban, suburban, and rural areas- ¼, ½, and 1 mile. In other words, if a tower is located within ¼ mile of another tower in an urban area, it could compete for the same prospective tenant. Of course, there are situations where that distance could be less or greater. For ease of analysis though, we utilize these distances.

For example, we previously completed an analysis of our proprietary tower data for a large hedge fund. Specifically, we examined each of the public tower companies’ tower datasets and compared to our own tower data. We looked separately at each large public tower company’s exposure to competitive towers in urban, suburban, and rural areas based upon multiple radii. We chose to use urban/suburban/rural designations instead of BTAs. While BTAs are used by the public tower companies as a proxy for urban/suburban/rural, we find that is misleading as BTAs can include urban and suburban and sometimes rural sub-areas in the same BTA.

We also examined each public tower company portfolio individually so that we could see which company was better positioned for rural expansion, urban infill and densification, and suburban expansion and densification. We also looked to see on average how many competing towers each tower company’s urban, suburban and rural towers had within a distance where a wireless carrier could choose one or the other tower. 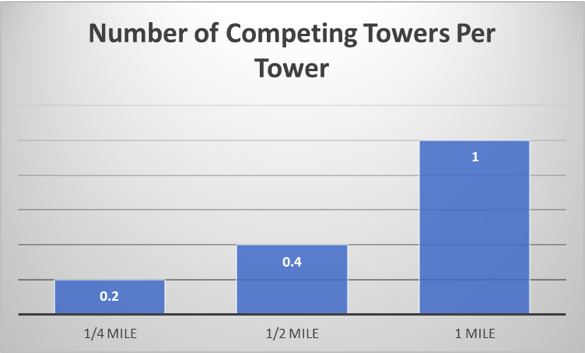 The tower companies have differing exposure to competing towers depending upon where and how they acquired their towers.

Our next near-term project will be using this previous analysis to evaluate how many new towers have been proposed or built near existing tower company towers to date- not just by Tillman but by other build-to-relocate (or BTR) developers as well. If you recall from previous articles, some wireless carriers have simply told any tower company that would listen where they would like to move off an existing tower, with the first tower company to have a tower standing being the one they would lease from.