While it may be hard to tell, Sprint PCS (S) is finally turning the corner. Dan Hesse, CEO of Sprint, is leading Sprint back from their apparent doom. Boost Unlimited is the latest in a series of efforts by Sprint to rectify their sinking stock prices. And from our viewpoint- it is a step in the right direction.
Let’s start with the basics: $50/mo for unlimited Voice, Push to Talk, and Text. All prepaid- and INCLUDING TAXES. The obvious comparison is either to MetroPCS’ or to Leap Wireless’ unlimited plans. MetroPCS’ comparable plan is $45/mo and Leaps is $40/mo- both of which do not include taxes- which add another 10%. But the biggest difference is that with Boost Unlimited, the user gets the benefit of a nationwide network as compared to either Leap or Metro’s limited buildout in primarily urban areas.
METROPCS NATIONAL COVERAGE
courtesy of http://www.metropcs.com/ 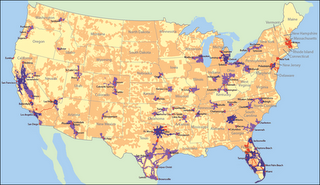 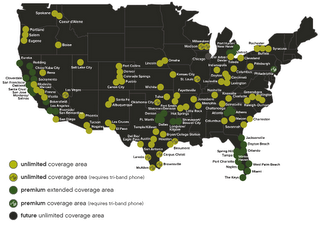 As you can see, if you travel a lot- especially to rural areas, you would have to pay roaming on either MetroPCS ($.49 to $.79/minute) or Leap Wireless’ plan. (comes with either 30 or 200 minutes free- charges above that). On Boost Unlimited, whereever Nextel’s iDEN network is- your phone works. Given Nextel’s substantial coverage over the US, your phone will work in far more places and at a reasonable costs. And having experienced poor network quality on MetroPCS’ underbuilt network here in Fort Myers first hand, I like other consumers would prefer better quality even if I am only paying $45/mo.

So who stands to lose from this plan? Phil Cusick, an analyst at Macquarie Research believes that Boost Mobile could add 1.9 million subscribers to the Sprint network in 2009, and another 1 million in 2010. Should the economy continue to falter, this may be conservative. Mr. Cusick identifies that MetroPCS and Leap could stand to lose the most especially in their legacy (older) markets. One of the pitfalls with pre-paid cellular service is that it has no contract and thus experiences higher churn.

Why does this work so well for Sprint? Besides the obvious need to reduce churn and actually have positive subscriber addition numbers, Sprint also needs to find a use for the iDEN network. As it previously promised to support the iDEN users through 2012 and tried but failed to sell the iDEN network, Sprint now gets to find some value out of its iDEN network. And given the number of subscribers that have left the Nextel network due in no small part to capacity issues on this antiquated network, there is plenty of capacity to be used by the new subscribers. Furthermore, because the users who would be interested in Boost Unlimited aren’t looking for data services, there will be nominal capital expenditures necessary to maintain the quality of the iDEN network. Lastly, this will free up capacity on the Sprint’s CDMA network.

What are the pitfalls? There are a few. Given the ARPU (average revenue per user) is lower than what Sprint currently receives ($56/mo for post paid without taxes), some Sprint users could switch to Boost Unlimited and use more network capacity for less than they currently pay. For instance, my wife’s company currently has 5 lines through Sprint, 3 of which will likely be switched to Boost Unlimited. Mr. Cusick does not expect that there will be significant cannibalization. Secondly, while there won’t be much in the way of capital expenditures required, there will undoubtedly be some required as Sprint/Nextel have built very few new sites since their merger in 2005. Coverage needs and demographics have certainly changed. Lastly, if MetroPCS and Leap counter with a reduction in rates, this could set off a rate war, which would undoubtedly cause AT&T and Verizon to retaliate as well. While this would be good for consumers, it would decrease carrier profits eventually leading to more mergers and less consumer choice. (Mr. Cusick believes that Metro/Leap will be more inclined to merge given the additional competition from Boost Unlimited).

All in all, we see Boost Unlimited as both a positive for subscribers and for Sprint (and its stockholders- which in full disclosure- I am one of them). The negative aspect for the entire industry is that Sprint’s price wars hurt the collective ARPU for all vendors and this new offering will only increase the impact.

(A special cite to Phil Cusick at Macquarie Research- his research was key to much of the thinking here).