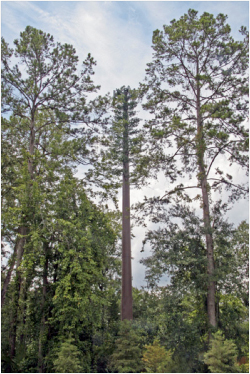 In the U.S., the FCC and the FDA are co-responsible for setting the guidelines for base station operation and RF exposure. The FCC is in charge of all wireless communication devices, while the FDA instructs and guides the FCC in matters relating to health.

The current guidelines set by the FCC were enacted in 1996, and were a combination of 1992 IEEE/ANSI standard and the 1986 NCRP guidelines. It applies to all broadcast antenna, including cellular base stations, regardless of their original license dates.

Specifically, the FCC standard for Power Density is 0.57 mW/cm-sq at 900 MHz and 1.0 mW/cm-sq at 1800-2000 MHz. A base station operating at maximum intensity with an antenna mounted 10 meters above any accessible areas could produce a power density as high as 0.01 mW/cm-sq within those areas. Realistically, however, the actual density of RF exposure will be in the range of 0.00001 to 0.0005 mW/cm-sq.

In most cases, base stations emit RF energy at levels thousands of times lower than those considered to be a health risk. The antenna itself, which can pose a health risk at areas within 8 meters, must be made inaccessible to the public, and anyone working within that range must be specially trained.

In spite of the opinions of expert groups like the World Health Organization and the American Cancer Society, as well as the findings of numerous studies, concern over possible health risks from RF exposure continues. Many groups exist around the globe that push for limiting base station power outputs or prevalence. Often, schools receive much of this focus. One such group, People Against Cell Towers at Schools (PACTS) is composed of parents in Hillsborough County, Florida, where a cell tower was placed at a local school. The group attracted a prominent local author, who has begun speaking with various authorities and school board members in an attempt to enact a ban on base stations at schools.

Such views are not limited to private groups, however. Certain public entities have demonstrated concern over RF exposure, including the International Fire Fighters Association and the European Parliament, which voted to restrict both base stations on school property, and the use of mobile phones by young children. Recently, the French government enacted a ban on mobile phones in French public schools. The measure was criticized by several groups for ignoring the base stations themselves. Although both private and public groups often cite studies concerning mobile phones, or even RF energy in general, they also point to a perspective held by many expert groups: that while existing evidence suggests there is little health risk posed by base stations, longer term studies must be performed before any real conclusions on RF exposure can be drawn. They say that until such studies can be enacted, people should not be subjected to radiation that may eventually be proven to have negative effects.