Radio-frequency (RF) energy is radiated by cellular base stations and mobile devices, as well as many other sources, including broadcast radio and television towers. The radio-frequency energy emitted by these sources is non-ionizing, and has a fundamentally different effect on humans than the ionizing energy used in X-Rays, for example. Ionizing radiation strips electrons from molecules and atoms, which can damage the genetic material in cells. While both ionizing and non-ionizing radiation is caused by electromagnetic sources, radio-frequency energy operates within frequencies far too low for electrons to break their chemical bonds. RF energy spans the frequency spectrum from 3 kHz to 300 GHz. It’s sometimes referred to as microwaves, radiowaves, RF radiation or RF emissions. 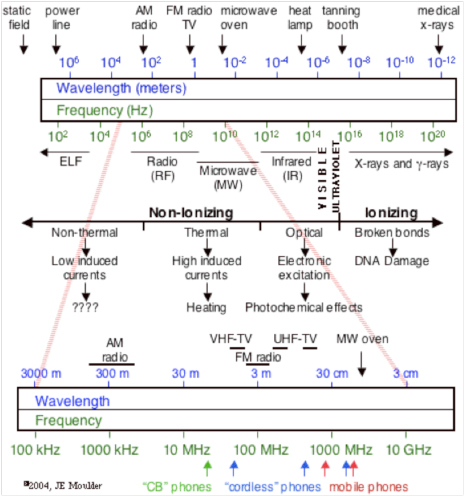 Although non-ionizing, radio-frequency energy can be potentially harmful with significant amounts of exposure. Most of these effects are thermal, that is, caused by heating effects. They include skin burns, deep-tissue burns, heat exhaustion and heat stroke. Such effects depend almost entirely on the rate of absorption, and the frequency itself has very little influence. Below a certain rate of absorption, called the specific absorption rate (SAR), no biological effects have been proven. This means that the duration of exposure is inconsequential, so long as the radiation is absorbed at a rate lower than can cause thermal damage. Even constant exposure to radio-frequency energy sources, such as base stations and mobile phones, are safe from thermal effects as long as the exposure is absorbed within acceptable levels.

Other than those risks posed by heating effects of radio-frequency energy exposure, there has been little evidence of other risks, called non-thermal effects. None of these effects, however, have been independently replicated.