On September 28, 2012, Crown Castle and T-Mobile announced that Crown was purchasing 7,200 towers from T-Mobile.   This didn’t come as much of a surprise as T-Mobile publicly announced they were selling their towers (we discussed this in the last newsletter).  Many industry experts with whom we corresponded with felt that Crown was the lead bidder and it turns out they were correct. 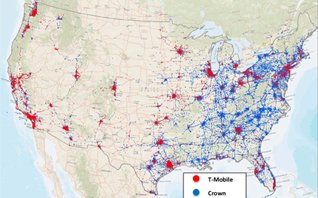 Crown Castle is buying the towers for $2.4 billion, or $334,000 per tower.   Crown has been patting itself on the back for buying the towers for less than other recent tower transactions.  However, this portfolio was substandard when compared to other recent transactions.  Before SITA was ever formed, the president of SITA did site acquisition work for T-Mobile (previously Voicestream).   At the time, T-Mobile had granted the right to American Tower Corporation (ATC) to build any of the towers that American Tower deemed valuable, under what is known in the industry as a build-to-suit deal.   Subsequent to that time, T-Mobile also entered into a similar build-to-suit deal with Mobilitie.  Thus, over the last 10 years, both American Tower and Mobilitie could and did “cherry pick” from the potential tower development opportunities that T-Mobile had acquired.  If a tower site that T-Mobile identified as desirable had clear upside from future tenants on the tower, American Tower or Mobilitie could choose to build the tower themselves.

This meant that the towers that were built and owned by T-Mobile were ones that, in many cases, American Tower or Mobilitie passed over as undesirable.   This isn’t to say that the sites were actually undesirable, just that they appeared to be at the time.  From what we hear, close to half of the 7,200 towers being purchased from T-Mobile were designed as single tenant towers- towers that were designed to accommodate T-Mobile’s equipment only.    That means that Crown will have a difficult time adding tenants to those towers without making structural modifications to the tower.   The tower portfolio being sold currently has an average of 1.6 tenants per tower, which is lower than the typical Crown Castle tower.  Crown Castle’s typical tower tenant average is just over three tenants.

Lest you think that we are being overly negative, the towers are well positioned in primarily urban and suburban areas, which are likely to see greater lease-up from new wireless tenants in the future.   The portfolio also gives Crown Castle a stronger presence on the west coast, specifically in California and Washington – states where Crown’s portfolio is not as strong.

For landowners with T-Mobile tower ground leases, this does put them in a better situation.  Crown will certainly be more aggressive about purchasing or extending the underlying ground lease than T-Mobile has or ever would be.    As we suggested in the previous newsletter, any of the 7,200 ground lessors who did not sell their T-Mobile ground leases are in a better position now.   It will take some time for Crown Castle to understand what they have and start making buyout or extension offers; but when they do, landowners might be enticed.   If you want additional assistance in determining what your lease is worth to Crown – either for an extension or for a lease buyout, please feel free to contact us.

If you receive an “estoppel” request from Crown Castle, we implore you to have it reviewed by a competent attorney.   An estoppel is supposed to be a disclosure by you to Crown Castle that verifies that the lease is in place and that the current rent amount is correct.  The estoppel also says that you believe that you have no claims against T-Mobile.   However, in the past, other companies have used an estoppel as a means to get the landowner to “amend” their lease by adding clauses or language that the landowner never agreed to before.  These estoppels can have a significant impact on your future rights as the ground lessor.  Thus, we strongly recommend having an attorney review the document and compare it to the lease agreement.  If the estoppel purports to amend your lease, in most cases, it is not necessary to sign it.  In some cases in the past, the tower companies have offered compensation for landowners to sign the estoppel.  That doesn’t mean you should sign it; you might be giving away more than you get.  If you would like us to review your estoppel, please contact us.