Number of Cell Towers Expected to Grow Significantly by 2010

Number of Cell Towers Expected to Grow Significantly by 2010 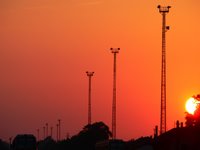 It is clear that many municipalities expected that the growth of cell towers had slowed- not increased in pace. We spoke to a planner director in a top 10 city who suggested that she currently had 85 new applications in- and that the shear number of applications were preventing her from focusing on other planning matters. (She also said that some of the site ac/zoning contractors were some of her worst constituents to deal with- apparently they believe they are entitled to immediate review and can’t understand that they are in line).

Many municipalities wrongfully believed that they had already experienced the worst- but that is frankly incorrect. The industry has already gotten the easy sites- the industrial and commercial sites- now the carriers are looking to infill the more difficult areas to cover and are willing to pay for that coverage. New applications are being submitted in residential areas- where historically the municipality had no issue with keeping them out. From my own data- there are far more stealth type structures being proposed- partially because zoning and planning commissions are getting smarter.

If you are a municipality- feel free to post your experience or contact us directly for more information.

Cell Carriers and Tower Companies all Joining the Renegotiation Fray

Ownership of Towers by the Carriers