On September 6, 2013, American Tower Corporation (AMT) announced the acquisition of Global Tower Partners. American Tower Corporation, as of the end of the 2nd Quarter of 2013, owned 22,599 towers in the US, and managed approximately 9 -10,000 rooftops. The acquisition adds approximately 5,400 towers in the US, along with 9,000 rooftops under management. Furthermore, the portfolio includes 800 “domestic property interests,” which is akin to leases that GTP bought in bulk from lease buyout companies. American Tower paid $4.8 billion for the portfolio which equates to around 13 times the net revenue. Below is data that we pulled from the conference call announcing the transaction. 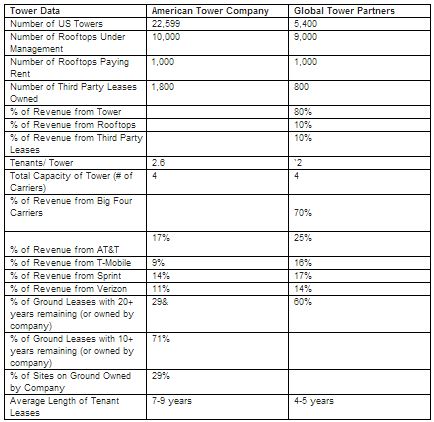 As we have suggested in other articles, the purchase multiples for acquiring cell towers are at a high point, so Global Tower Partners sold at an excellent time. (In our opinion, their timing could not have been better.) As for American Tower, time will tell whether the acquisition of this portfolio will be a good one. American Tower points out during the conference call announcing this transaction that the towers are younger, on average, and the tenants per tower is lower. American Tower suggest that these towers should experience greater growth because they are younger and have a high percentage of unused capacity.

For landowners with American Tower leases, little will change. There is nominal risk that American Tower will start terminating their own ground leases due to nearby Global Tower Partners towers. Existing offers/deals to buy and extend leases will continue as planned.

If you have any questions about this proposed acquisition, please don’t hesitate to contact us.