Comcast Corp. is the largest mass media and communications company in the world, and the largest cable plus ISP provider in the U.S. In September, 2011, it created CTI Towers, in order to aggregate its individually-managed tower portfolios under one central umbrella. CTI Towers, a privately-held company located just outside Boston, began by managing 750+ towers across 39 states. Most of these towers had previously been used as head-end towers by Comcast’s cable TV division, but were repurposed due to technological advancements in fiber optics that made the site unneeded for Comcast’s operations. Since 2011, CTI Towers has acquired 230 of those initial 750 towers outright from Comcast. It is now classified as one of the top ten wireless tower operators in the U.S.

Below is a map of the CTI Towers taken from their website. 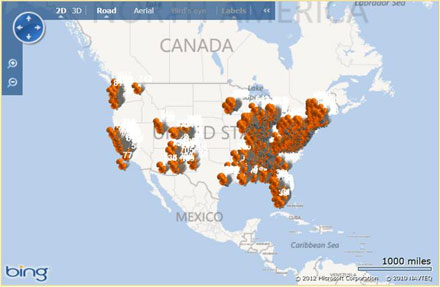 CTI Towers’ revenue comes from wireless carriers such as: AT&T, Verizon Wireless, Sprint, T-Mobile, Cricket, and Clear Wireless along with many broadcasters, municipalities and utility companies.

In October, 2013, CTI Towers announced that it had secured $30 million in debt financing, and also closed its first third-party tower acquisition, adding five towers, purchased from a major wireless carrier, to its total tower count. Its strategy going forward is to intensify its site acquisition efforts, as stated by its chairman, “We’re excited to see CTI Towers grow its footprint and enhance its ability to deliver even more tower inventory across the country, helping all wireless carriers keep their networks in-stride with consumer demand.”

Steel in the Air believes that CTI Towers was formed so that its aggregated portfolio of towers could be built up and sold to one of the larger tower companies. That being the case, their strategy might be to “lease up” and add as many tenants as possible to their towers prior to selling. This could be good news for property owners who are currently engaged in leases with CTI Towers, since the collocation of additional wireless carriers might necessitate the leasing of additional ground space. Thus, landowners might find themselves engaged in leases with new tenants, which would likely result in increased rental revenue. Alternatively, some of the leases under these towers are coming up for expiration, which will give landowners the opportunity to negotiate more favorable lease agreements.

Recently, CTI Towers has been contacting ground lessors (private and public property owners, and municipal governments) who are engaged in leases with Comcast/ CTI Towers. Its representatives are attempting to extend existing ground leases (increasing the value of the underlying asset), or in some cases, to modify existing leases in other ways.

Lease Extension: CTI Towers proposes to extend their ground lease for 30-50 years. They typically offer a nominal signing bonus and will sometimes offer to increase the rent going forward.

Lease Expansion or Consent Requests CTI Towers contacts existing leaseholders to request the right to expand their lease footprint, or to receive consent to sublease space on the tower to a wireless provider.

Lease Renegotiation: CTI Towers attempts to persuade leaseholders to renegotiate their lease agreements because Comcast will no longer be using the tower.

We want to remind our clients that each lease is a unique asset, and must be valued using appropriate metrics. Some towers are more valuable than others, thus the same holds true for leases. In other words, understanding the value of the specific tower (including the relative value to the tower company as part of its portfolio as well as the fair market value) is crucial before commencing cellular lease negotiations.

Steel in the Air can assist you in evaluating the current value of the tower on your property and the potential future value of the tower to CTI Towers – whether they end up keeping the towers or selling them. Please contact us for a free no-obligation initial discussion. We will review your property and tower, and let you know whether we think it is worth your time to retain us. If so, we will also provide a quote for services. Whatever you do, please don’t blindly sign documents that CTI Towers (or any wireless company or tower company) puts in front of you.